A little flighty, a bit of a tease...

Just done a promo flyer about the comic to distribute at this coming weekend's (Sat May 16) Zinefest in Hamilton, along with the usual caffs and cool shops. Won't win awards for subtlety but garish design might succeed in attracting the visual attention of punters, which is one of the key principles of advertising (yo! Saatchi and Saatchi! giz a fancy job then!). 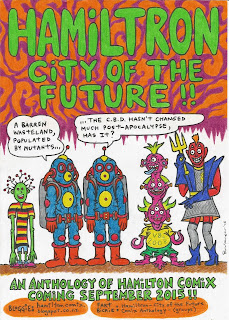 It's a happening, Hamilton!

Welcome to the info/promo blog for the forthcoming Hamilton comics anthology 'Hamiltron - City of the Future!'

A bit of background on the project. Hamilton is New Zealand's 4th largest city, but one which suffers from a chronic identity crisis due to factors such as being close to Auckland (NZ's biggest city), being inland rather than on the coast like most other NZ conurbations, and being the centre of a major farming region - with all the cultural sophistication that implies.

The phrase  'Hamiltron - City of the Future' was coined around the turn of the millennium (probably by local radio personality Greg Page) as an ironic slogan which celebrated Hamilton's inherent uncoolness, and was picked up on to become part of the local vernacular and a symbol of civic pride. The irony involved also ensured that the slogan was appropriated by hipsters, as evidenced by these now collectable 2009-era T-shirts (I think from the Mr Vintage company?)... 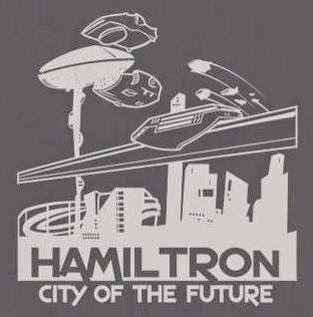 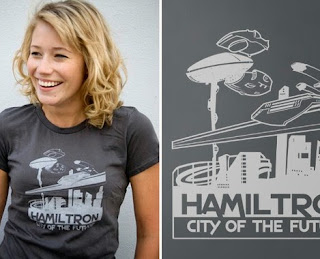 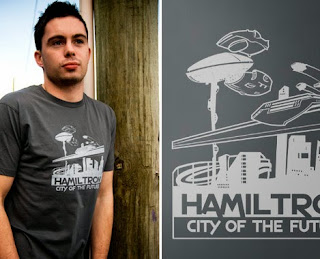 Anyway, in October last year my wife, with the infinite wisdom that wives innately possess, suggested I apply for a Creative Waikato/HCC Arts & Culture Grant towards the making of a Hamilton comic project as a means of alleviating my ongoing despondency related to chronic under-employment. Reasoning that such a project would probably work best around a central theme, I chose 'Hamiltron - City of the Future' since it contained lots of imaginative potential for interpretation (only after much agonising over other crowd-pleasing contenders such as 'The Muntville Chronicles' and 'The Rollicking Escapades of Captain John Charles Fane Hamilton Esq').

Since such grants tend to go to the likes of avant-garde performance cafes featuring interpretive dance and middlebrow plays about growing up in the 1950s, a 'Hamiltron-City of the Future' comic was presumably deemed novel enough to be "the recipient of community funding", and I was notified that the application was successful earlier this year.

Unfortunately I now have to organise getting the bloody thing made. I've spent the last few months hustling possible contributors, mostly from the hallowed annals of current and former Hamillton comic creators, and fretting about budgets for production costs etc. Since we live in a hyper-consumerist, neo-liberal technocracy in which individuals are increasingly in a cyborg-like state of deep symbiosis with digital media technologies, I thought I should be a responsible editor and try and publicise the project on the interwebs, using the standard no-budget platforms of (gag) a Facebook page (Hamiltron - City of the Future Comix Anthology - access and bookmark now, quick!) and a blogspot, i.e. this very one that I've just set up (thanks Google - pity that creepy Google glass didn't take off like yer Blogger formats eh?)

Therefore, the intention of this blog is to post the usual 'raising awareness and garnering attention' jive such as progress updates and teasers, along with promoting the work of the contributors whose creative efforts are bringing the daft idea to fruition. Comments and contributions welcomed!